Perfect Storms in Haiti and Jamaica: Community Policing is a Governance Strategy.

In many Caribbean communities over the past five years, gang wars have been increasing in number and level of casualties, exacerbating insecurity and social tensions. Jamaica and Haiti are two of the most extreme cases, though their organized crime profiles and histories differ markedly. The role of citizens and their relationship with law enforcement in the two countries also differ a great deal, but they offer the same lessons for the nature and importance of civic engagement and good governance in security.

Both countries’ public statements about crime and violence reflect their vulnerability to the effects of crime on their economies. For example, though Jamaica imposed a curfew in Montego Bay and all of St James Parish at the beginning of this year due to violent crime, National Security Minister Montague announced in Parliament that Jamaica is safe for tourists. Within just a few months, in April, after a failed attempt to apprehend a notorious gang leader and a deteriorating security scene, Haiti’s Prime Minister LaFontant declared, also in Parliament, that Haiti is a safe country. With the lowest police-citizen ratios in the hemisphere and a tradition of strong street-level support for law and order, both Jamaica and Haiti have always been perfect candidates for innovations in community-based policing programs.

Community policing is a style of policing that calls for police and citizens to work together to identify and address the root causes of crime. Rather than reacting to crime after it occurs, community policing is a structured, systematic and proactive approach that seeks to prevent crime (or its recurrence). It does not replace reactive policing but enhances it. Community policing is particularly relevant to gang reduction at two levels. One is the causative level, i.e. why the gang was created. This level addresses the social and economic conditions that contribute to the reasons why gangs are created and flourish. (For instance, some are created by youths to protect their communities from threats, and with time they adopt destructive methods or illegal behavior. Others are created as criminal rings. Yet others have their origins in political conflicts.)  The second level at which community policing is relevant to gang reduction is the relational level, i.e. the relationship that develops between gangs and the communities they control (or “protect”). Gangs derive their strength from local weaknesses and realities. Everywhere in the world residents fear retaliation from gang members, especially when they do not believe the police will be able to protect them. Often residents, in a sort of “Stockholm syndrome” relationship, are co-opted by gang leaders who provide them with security and social support that could not be provided by government. The widespread support for Christopher “Dudus” Coke in Tivoli Gardens, Jamaica, in 2010 and for Guy Philippe in Pestel, Southern Haiti in 2017 are two well documented cases in point.  Often, in places where community policing methods are not in use, community members are alienated by the behavior and attitudes of the few police officers they know. These relationships make anti gang actions more difficult and costly in lives and resources.

In spite of similarly severe gang problems, Jamaica and Haiti have markedly different experiences with community policing programs. Some community observers claim that last year’s departure of the troubled United Nations Stabilization Mission in Haiti, MINUSTAH, couldn’t have been better designed to guarantee a breakdown in the security situation. Without community security benchmarks and community-police relationship building programs, the levels of tension in Haiti’s most vulnerable neighborhoods was increasingly palpable as the UN moved out and gangs moved in. Though MINUSTAH’s relationship with communities had deteriorated over the mission’s two decades of presence, its contribution to police standards and to the economy had been significant – while it was present, albeit without much of a sustainability plan other than training, – to ensure continuation of standards post withdrawal.  Most disappointing, opportunities to build a truly local community policing capability were unfortunately squandered by donors who had tried to introduce their own ready-made community policing models, rather than build the Haitian police force’s capability to do community policing, as had 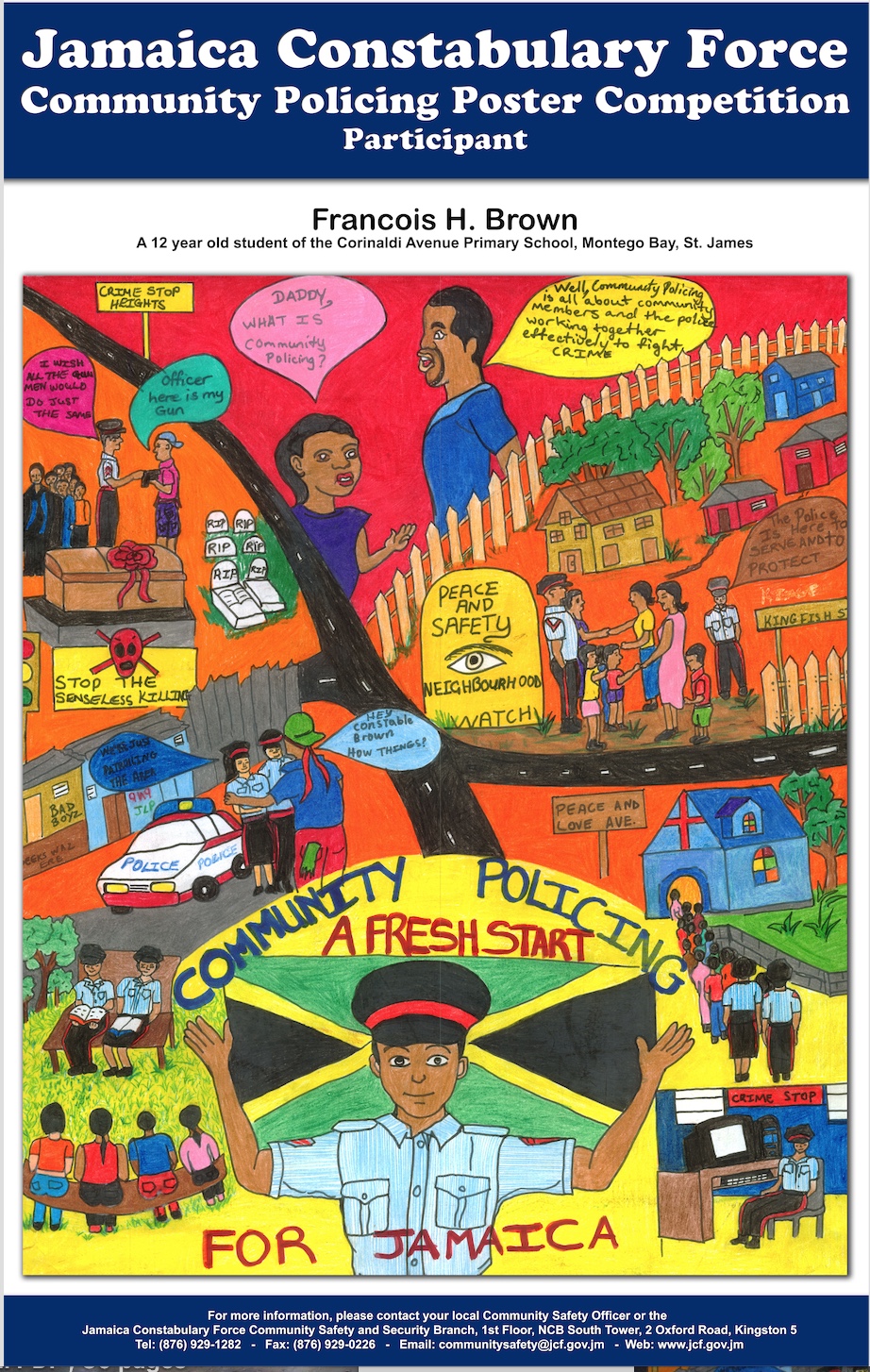 The Jamaican Constabulary Force (JCF) formally adopted community policing as a methodology to be used island wide. In addition, the effort in Jamaica, funded by the U.S. Agency for International Development (USAID) and supported by a well coordinated group of donors, was transparent, publicly discussed, and involved the active participation of schools, community based organizations, advocacy groups, the business community, and the media. Unfortunately, in rolling out its community policing program throughout the island, the JCF assigned dedicated Community Safety and Security Branch (CSSB) officers to work with the communities rather than make community policing a policing method for the entire force. Making a specific branch within the police responsible for community policing may have helped to roll out the methodology throughout the island, but it prevented rolling out the methodology throughout the police force itself. And associating it with a newly created administrative entity within the force made it an easy political and financial target for detractors. Nonetheless community policing is still widely supported by citizens as an issue of good governance and provides a platform for civic engagement. This was not the case in Haiti, where communities have traditionally been what one might describe as consumers of policing services, rather than active participants in partnerships with the police to identify and address the causes of crime and insecurity. There have been notable exceptions, but these have either been rare or not well publicized and built upon by local governance building programs.

There was, briefly, an opportunity for the two neighboring countries to compare notes

and share experiences. In July 2008, as Jamaica was beginning its island wide roll-out of community policing, the Director General of the Haiti National Police (HNP) invited the Commissioner of the JCF to meet with him to discuss Jamaica-Haiti inter-island security issues. Taking advantage of the opportunity to establish technical working relations between the two police forces, the JCF Commissioner sent, in his stead, a group of high ranking officers from several divisions to have face to face meetings with their Haitian counterparts. In a meaningful gesture, the Jamaican group presented their recently completed community policing manual, their very first edition, to the Haitian group. 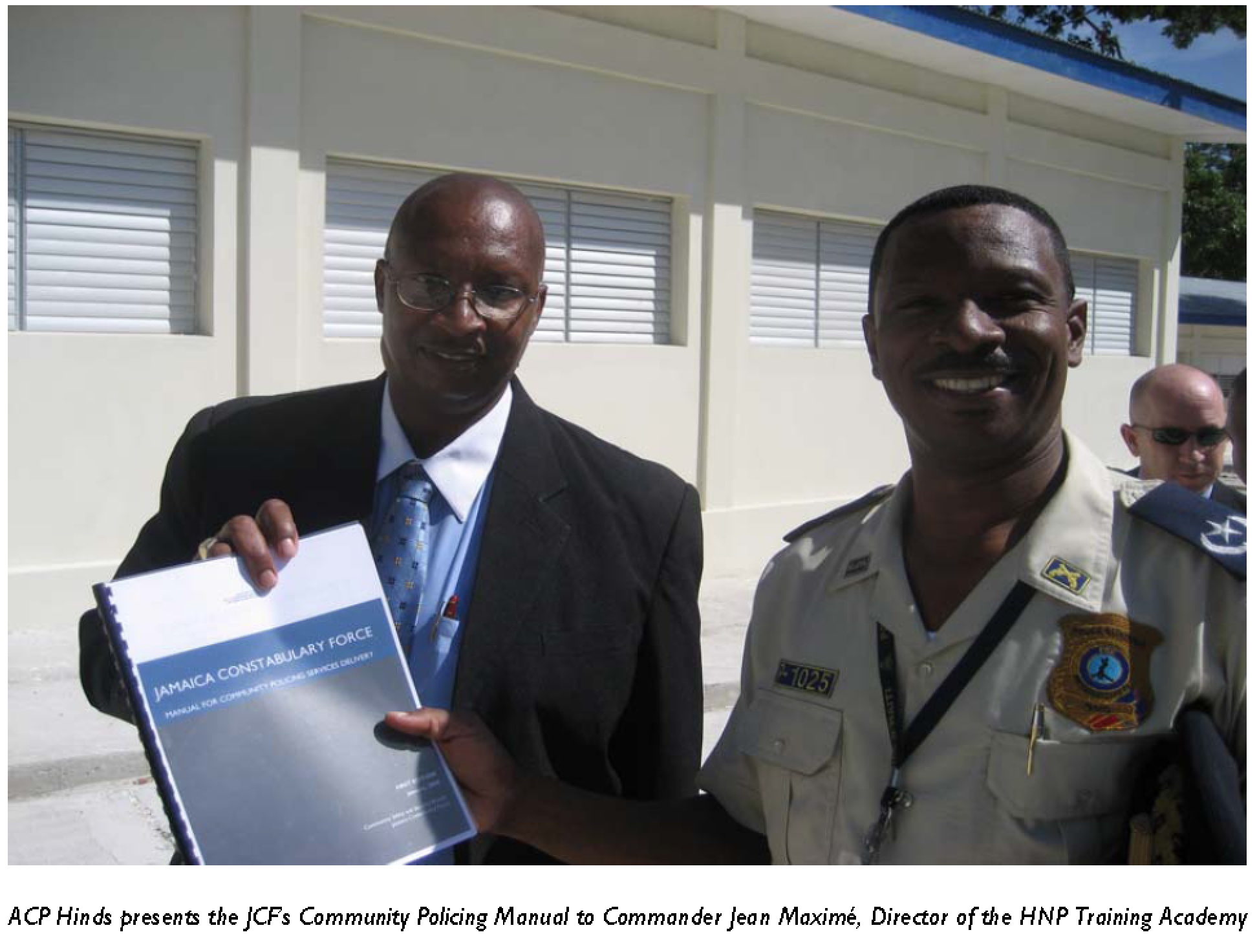 Senior MINUSTAH police personnel got actively involved in supporting the nascent relationship. Unfortunately continued collaboration was interrupted the following year in 2009 when the JCF Commissioner was replaced, and then the Haiti Earthquake took place in January 2010 before new relationships could be developed, during which, in just forty seconds, the MINUSTAH officers who had been supportive and actively involved in furthering the relationship were all tragically killed. This was followed the next year, in 2011, by the replacement of the Director General of the HNP at the end of his mandate. Even though the US Government was playing a lead support role in the development of community policing in both countries, the State Department’s predesigned turnkey replication approach in Haiti was vastly different from USAID’s collaborative local capacity-building and civic engagement approach in Jamaica. Without directives from Washington to the US embassies in both Jamaica and Haiti, and without the existence of a coordinating advocacy group, the opportunities to exchange experiences in community policing were therefore lost and inter island gang activity resumed.

More changes at the helm would take place in Jamaica over the ensuing five years. And, as if on cue, as MINUSTAH withdrew and Haiti’s economy tanked, leading to more crime and organized gang activity. A perfect storm. Neighborhood residents increasingly find themselves in the crossfire of anti gang actions, a reputation for lawlessness is reinforced, observers once again throw up their hands in despair, and more residents withdraw from civic engagement.  The cycle continues, and the gangs win.

Community policing provides an interface for citizens to be active partners in crime reduction. It is a compelling means to boost civic engagement. Given that one of the most important functions of any community is the safety and security of its members, community policing is arguably a key element in good governance. Conversely, gang activity is an indicator of shortcomings in a community’s governance relationships. It’s never too late to start building strong crime reduction programs and effective gang strategies. But these have to be built on the principles of partnership, local governance, and full inclusion of all citizens, not just youth, the poor, the wealthy, local power elites, or the disenfranchised. Though the basic principles are applicable to all communities, the only effective models are those that are developed locally, based on local realities.

2 Responses to Perfect Storms in Haiti and Jamaica: Community Policing is a Governance Strategy.